Can a drone locate walls and other flat surfaces using sonic waves? Professor Gregor Kemper from the Chair for Algorithmic Algebra at the TUM, and Professor Mireille Boutin of the Purdue University in Indiana, USA, have mathematically proven this in their publication A Drone Can Hear the Shape of a Room.

Can echo-location be used to measure walls and other flat surfaces? This question has long occupied mathematicians on a theoretical level. It has already been proved, for example, that four microphones and a loudspeaker in one room are sufficient, to be able to locate walls and calculate their inclination.

In reality however, this would be a very elaborate process, as the microphpnes would have to be brought into chance positions in the room independantly of one another. Kemper and Boutin therefore go a step further. In their theoretical approach, they place the loudspeaker and the four microphones on a drone, so that the measuring equipment can be flown directly into the room.

In the following video, we illustrate how drones can hear walls. 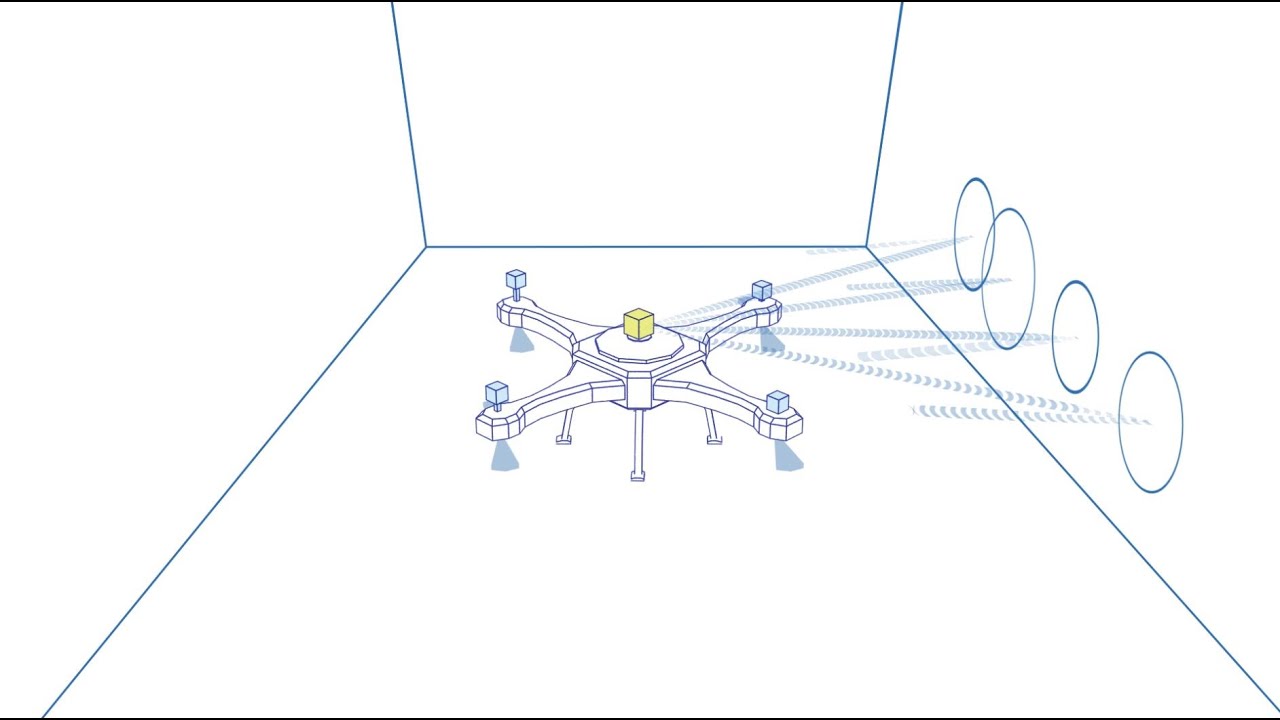 Algorithm identifies echos from a wall

The basic principle remains unchanged in the current approach: When the loudspeaker sends out a sound impulse, the waves bounce back from the walls. These direct reflections of the impulse are referred to as first order echoes. The biggest problem arising in the mathematical feasibility study: "Every microphone detects a large number of echoes. We need to be able to decide with certainty which echoes are coming from which wall," says Kemper.

The transit time – the time delay between emitting the sound pulse and receiving its echo – can be determined very precisely using the microphones. All transit times from a given wall have a specific relationship with one another. Kemper and Boutin developed a new algorithm that uses this relationship to assign individual echoes to a particular wall.

Once the echoes have been assigned to the right walls, the position and inclination of the walls are calculated using a geometric approach similar to that used by GPS when determining location data.

The calculation can go wrong, however. That is because some echoes might satisfy the conditions of the mathematical relationship by chance. This leads to the identification of walls that are actually not there, so-called ghost walls.But how likely are ghost walls when using a drone for the measurements?

Kemper and Boutin clarify this issue in their scientific paper. They prove that the drone's freedom of motion is sufficient for the probability of placing it in a "good" position – meaning a position where no ghost walls are detected – to be equal to 1. In other words, such a placement is a near certainty. The only prerequisite is that the microphones are not arranged in a common plane on the drone.

From theory to practice

In a next step, the researchers' scenario will become more realistic: They hope to find a mathematical solution for when errors or inaccuracies occur during measurement. They also intend to study configurations with the loudspeaker and microphones mounted on ground-based vehicles.

An extensive press article from the TUM can be read here: "How drones can hear walls".